A visit to the Windy City isn’t complete without a stroll through Millennium Park. Home to hundreds of free events, festivals, and concerts, the 24.5-acre work of art, comprised of architecture, sculpture, and landscape design, is the top tourist stop in the Midwest with an estimated 20 million annual visitors. Any visitor that hasn’t seen the revitalized Millennium Monument in the northwest corner of the park’s Wrigley Square has a reason to make a return trip.

In addition to restoring the monument’s deteriorating façade, the Millennium Park Foundation, a private nonprofit organization that supports enhancements to Millennium Park, saw an opportunity to draw more people to the City of Chicago’s Millennium Monument with color-changing architectural outdoor lighting.

“Our hope in enhancing the Millennium Monument with color-changing lights was to add a new artistic note to the architectural appeal of the Monument, giving the City of Chicago the ability to use the Monument to celebrate holidays and other moments for the visitors to Millennium Park,” explained Dr. Scott Stewart, Executive Director of the Millennium Park Foundation.

With dim, outdated High Intensity Discharge (H.I.D) architectural lighting, the Millennium Monument, an impressive peristyle with doric columns, was getting lost in the night. Fixtures that were supposed to highlight the colonnade were directed toward the sky.

“Jim Curtin reached out to me and asked if I could help him put together a modern outdoor lighting design,” said Levin. “I pulled in our trusted partner KSA Lighting and Controls to assist me.”

“We deal with literally thousands of different light fixtures on a yearly basis, and there's just no way we can be an expert on all of them,” explained Curtin. “So you have to have somebody like Van Meter and Phil to set you in the right direction.”

To make matters worse, these fixtures – also in use at the base of the monument to light up the donor wall – were filling up with water every time it rained, causing the ballasts to deteriorate. “That was also a big catalyst for this project,” said Curtin. “The City of Chicago was paying a pretty good sum of money to have an electrician come out and replace and repair the lighting.”

A low-lumen rope light that was hanging loose from the underskirt of the fountain also needed to be addressed. 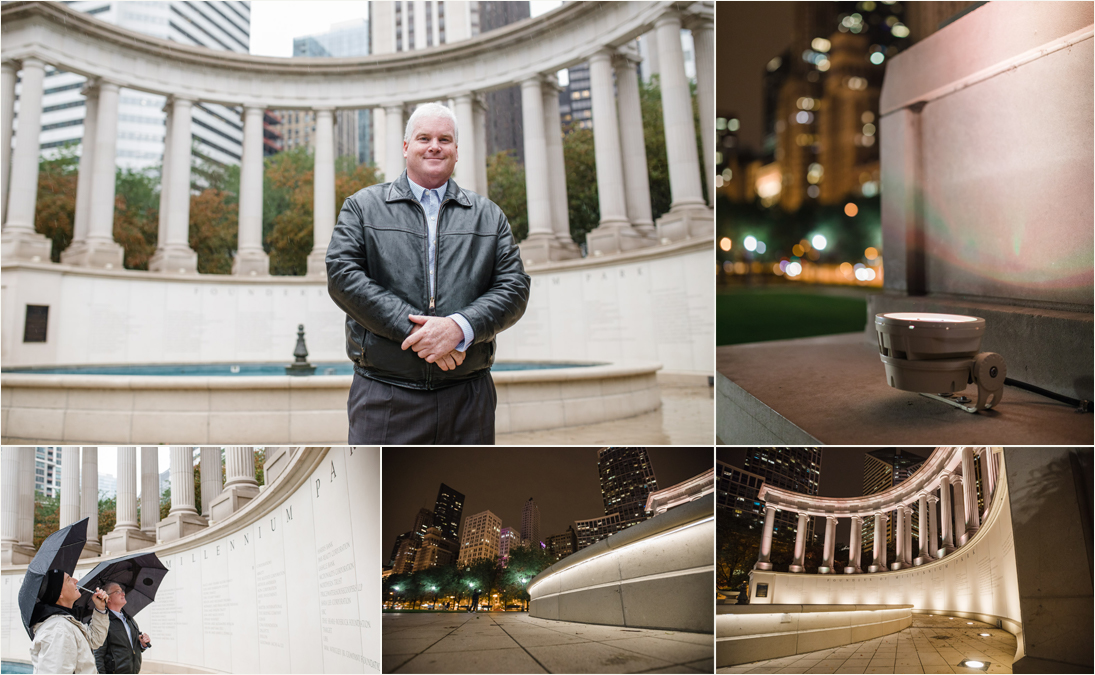 Levin recommended Q-Tran tape light for the underskirt of the fountain and Hydrel in-ground fixtures to emphasize the donor wall. These LED (light-emitting diode) products are brighter, more energy efficient, and will require a lot less maintenance.”

The centerpiece of Levin’s architectural outdoor lighting design was Lumenpulse LED RGB (red-green-blue) color-changing light. “There's now a big push within large metropolitan areas to highlight key things around the city,” said Levin. “A great way to do that is through color-changing light.”

The architectural lighting solution is similar to the technology that produces color images on a computer monitor or television screen, which means the city has millions of color options available and a great canvas.

With just the touch of a button, the City of Chicago can set color scenes to support causes, celebrate holidays, and entertain visitors. It can light the monument pink for Breast Cancer Awareness Month, green for St. Patrick’s Day, or red and blue for a Cubs’ World Series win.

Curtin’s crew handled the installation and precisely positioned the Lumenpulse architectural LED lighting to bring out the best in the monument. “The lighting is aimed at the monument for the most efficient use so there is a lot less light spill,” said Curtin.

Now the monument, donor wall, and fountain will be seen in the best possible light, and the City of Chicago will also reap the reward of lower energy costs. “There would be some energy savings for sure,” said Curtin. “The light fixtures are now all LED. So it's about a third of the wattage that they were using.”

There will be major maintenance savings too. “A metal halide lamp traditionally could last anywhere from 10,000-15,000 hours,” explained Levin. “Now with the LED technology installed, the city can expect upwards of 100,000 hours or more.”

“Over a five-year period, there will probably be no maintenance at all,” added Curtin. “There's obviously an upfront fee, but over time I think it pays for itself.”

The energy and maintenance savings alone will allow the city to show a return on the $125,000 investment in a relatively short period of time, and when you consider that the dazzling, color-changing, architectural outdoor lighting has given people another reason to visit the city – and spend money on lodging, parking, food, and entertainment – the project could easily pay for itself in under a year.

The Millennium Park Foundation succeeded in reaching its goal. “The system installed on the Millennium Monument is performing beyond our hopes,” shared Stewart.

“Millennium Park is a big tourist area that draws a lot of people,” said Curtin. “And when people walk around the city, and they see a clean, bright environment, that obviously is good for the entire city. I don't think a lot of people even realized that monument was there,” Curtin added. “But now that there's a color aspect to it, it really has drawn a lot of attention to it.”

Perhaps Levin alluded to the best result of all: providing Chicagoans and visitors alike with another magnificent meeting place. “It's great to see people congregating by the monument and enjoying the new light.”

Van Meter Inc. provides expert advice in the selection and design of modern outdoor lighting solutions and more. We welcome your call to discuss your next project. To speak with a Van Meter representative, call 1-800-247-1410. We’ll quickly connect you with the person or information you need.

Concur Electric Co. is a family owned and operated electrical contractor offering a wide range of electrical services. Since its inception in 1981, it has served the greater Chicago area with high-quality work and outstanding customer service.

KSA Lighting and Controls is a lighting agency that represents the full spectrum of electrical opportunities in lighting, controls, energy solutions and roadway.