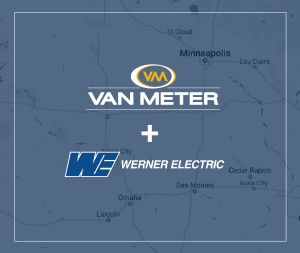 NEWS RELEASE – Van Meter Inc., a 50 percent partner in Werner Ventures LLC, the legal entity that owns Minnesota-based Werner Electric, announced today their intent to make a stock purchase of the remaining business from MacDonald Ventures. The sale is expected to close on April 30.

“For 20 years, Van Meter and the MacDonald family have proudly owned and supported a successful and growing business in Minnesota. We find ourselves mutually understanding that our shared Minnesota business could reach even greater potential through the efficiencies and market influence gained by being owned by one company,” said Lura McBride, President and CEO of Van Meter.

The joint ownership model of Werner Electric of Minnesota began in 2001 when Van Meter and MacDonald Ventures partnered to purchase an independent electrical distributor known as Northland Electric. “It has been a strong, 20-year relationship based on respect and a shared passion for the electrical distribution industry,” added McBride.

Werner Electric of Minnesota is headquartered in Cottage Grove, MN, and operates eight electrical supply locations—six in Minnesota and two in Wisconsin. The company employs 325 people and provides electrical and automation services, supplies, and solutions to industrial, contractor, and renewable energy customers across the northern region of the United States.