In 1975, ASHRAE 90-75: Energy Conservation in New Building Design was published as the first national energy code. Later, as part of the 1989 edition, ASHRAE 90 split into ASHRAE Standard 90.1: Energy Standard for Buildings Except Low-Rise Residential Buildings and ASHRAE 90.2: Energy-Efficient Design of Low-Rise Residential Buildings. This split solidified Standard 90.1 as ASHRAE’s answer to how to regulate and evaluate energy efficiency in commercial buildings.

Successive versions of Standard 90.1, up to ASRHAE 90.1-2016, have reduced the energy consumed by a typical building designed to the standard by over 50% according to research done by Pacific Northwest National Laboratory. This progress is shown in Figure 1. ASHRAE 90.1-2019 is published as the most recent version, but has not been analyzed as part of the research mentioned or extensively adopted. The cumulative and methodical progress of Standard 90.1 has taken building design out of the era when no code requirements were placed on energy usage, and important building characteristics such as the inclusion of wall insulation were left up to the individual motivations of the design and construction teams. 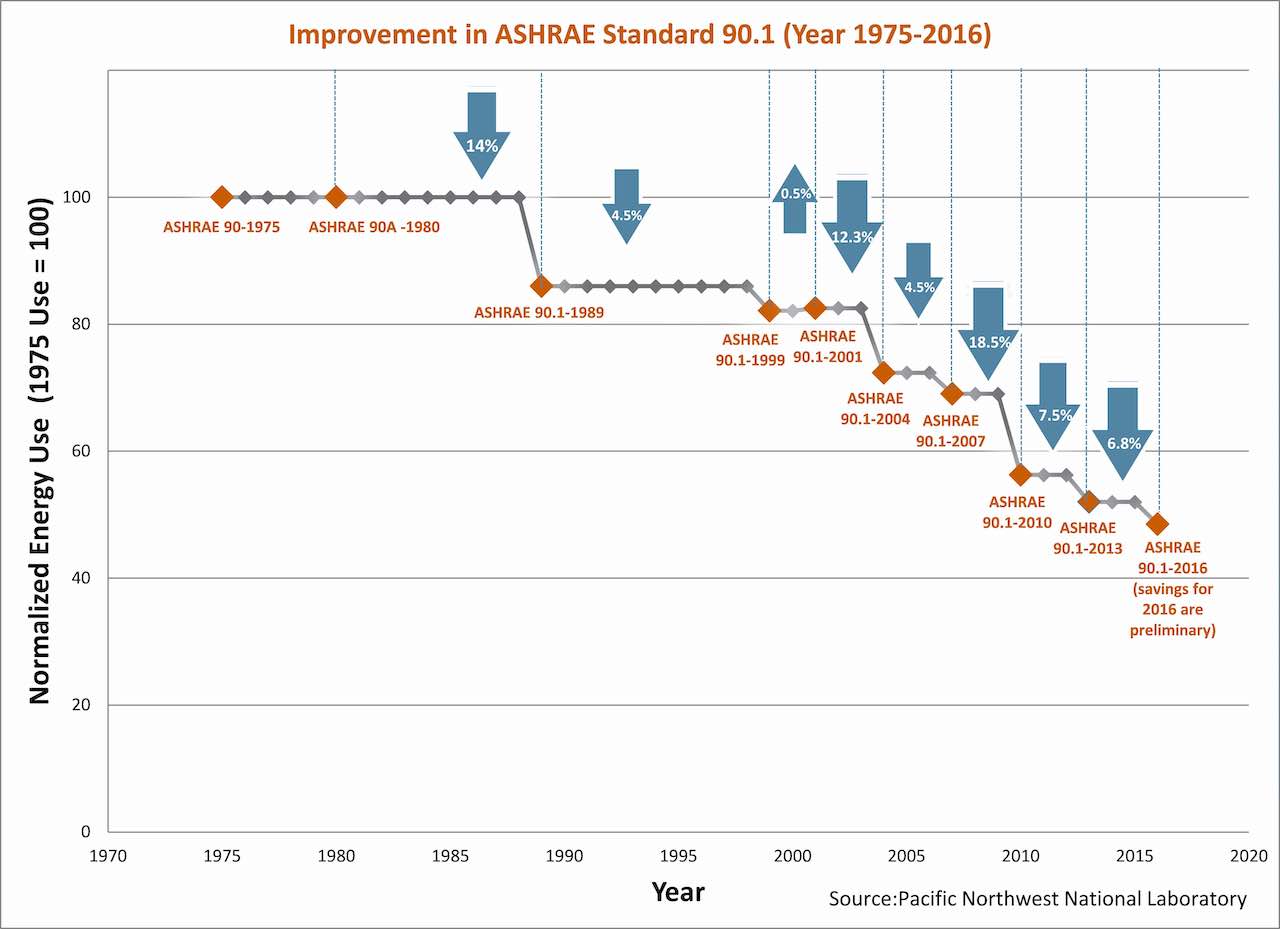 Much of the success and widespread use of ASHRAE Standard 90.1 is likely due to the rigorous public review and stakeholder involvement that contributes to the development, debating and approving of each section of the standard. Public comments and stakeholder contributions are continuously collected by the ASHRAE to produce lists of addenda that are incorporated into each successive new version of the standard.

Starting with ASHRAE 90.1-2001, each new version of the standard is published every three years and referenced, reviewed or amended as desired by adopting agencies. The most recent result of this process is ASHRAE 90.1-2019, which contains many improvements, additions and clarifications that can be explored in-depth via the Department of Energy’s Building Energy Codes Program website.

Structurally, Standard 90.1 varies in length from 188 pages for ASHRAE 90.1-2007 to 388 pages for ASHRAE 90.1-2016. It is a document that demands careful study to effectively apply. The standard regulates building thermal envelope, lighting systems, power systems and heating, ventilation and air conditioning systems, but does not regulate equipment and systems that are integral to the function of the building occupants. The latter category, called “unregulated loads” includes plug loads such as computers and printers, information technology equipment, cooking equipment, elevators, laboratory equipment and many others.

The building blocks of the standard are mandatory provisions that all complying projects must design to, prescriptive component efficiency values and guidelines for energy modeling-based compliance. When considering how to comply, the standard provides flexibility. Standard 90.1 has two methods for showing compliance termed “prescriptive” and “performance” paths.

Prescriptive compliance involves meeting checklist of mandatory provisions while ensuring building component efficiencies meet or exceed required values given in the standard. Performance-based compliance (aka the “energy cost budget method”) involves creating a computer simulation of the designed building and comparing it to a baseline model created as per the rules set forth in the standard. Standard 90.1 also contains Appendix G, energy modeling guidelines on documenting beyond code energy savings, that provides a tool for sustainability rating systems such as U.S. Green Building Council LEED rating system to quantify the amount a given design could outperform the code minimum.

What is Standard 90.1 used for today?

In the United States, the decision of which energy code to adopt is made by state rather than federal policy. A review of state energy code policy shows that adoption is as varied from state to state as any other policy issues. To date, 38 states have adopted a version of Standard 90.1 and 32 states have adopted some version of the International Code Council’s International Energy Conservation Code. The overlap is due to many states adopting both and allowing design teams to choose between the two; or adopting one for public buildings and another for government or state-owned buildings.

IECC has many parallels to Standard 90.1 including prescriptive and performance compliance paths. IECC is released on staggered three-year code cycles, where IECC lags Standard 90.1 by two years. In structure and content IECC relies heavily on Standard 90.1’s consensus review system of public commentary and involvement of expert, volunteer input. The two documents are intended to work together because many project teams are faced with the task of complying with a locally adopted IECC energy code and working within a Standard 90.1-based green building rating system.

However, the differences between the two documents are significant enough to give energy code compliance professionals the added task of explaining and justifying compliance differences to design team colleagues and building owners. Because IECC allows for Standard 90.1 compliance as a potential IECC compliance path, the process of making a decision on which path to choose is complicated further. Efforts to bring these two codes into closer alignment could reduce energy analysis efforts and promote more energy-efficient building design.

Unfortunately for someone trying to compare state energy policy, each state applies amendments and different code versions to different project types or regions as mentioned above. In an effort to normalize this comparison, the DOE Building Energy Codes Program has compiled list of state energy code policy details and performed energy modeling to demonstrate how each state’s adopted energy code compares to different Standard 90.1 versions. The energy modeling incorporates all aspects of state energy code policy including quantifiable addenda to each state’s adopted code. Figure 2 shows the results of the DOE energy analysis. The models are created using the DOE prototype building models that are consistent across states. 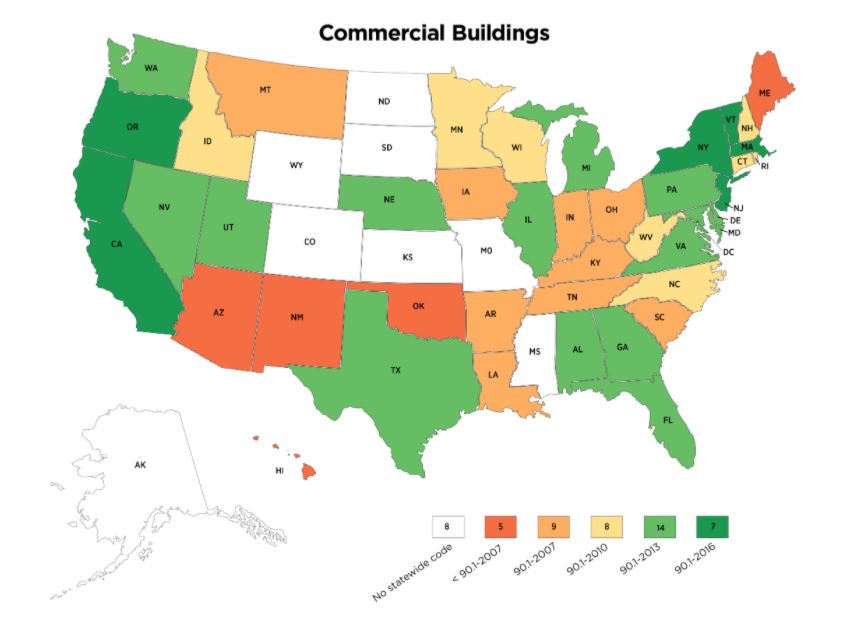 Figure 2: This map shows the status of state energy code adoption by comparing the state code policy to the effective equivalent version of ASHRAE 90.1. Some states with no statewide energy code have varying levels of energy code policy in different municipalities. Courtesy: Department of Energy Building Energy Codes Program

Where is zero net carbon code happening or beginning to happen?

For inspiration, look to these jurisdictions that are moving toward zero net carbon code: