As solar energy prices continue to drop in Iowa – we’ve seen a 47% decrease in the last five years, according to the Solar Energy Industries Association – more businesses are starting to realize it as a viable option. But misinformation can get in the way of deciding whether this type of renewable energy will work for you.

Solar energy in Iowa is too expensive, especially for small businesses.

Reality: Today, on average, total solar costs are approximately $2.50 per watt (counting material, installation, etc.). Compared to just a few years ago, when total costs were $6 per watt, expenses have decreased significantly.

The federal and state tax credit will begin to step down starting in 2020. 2019 will be the last year to take full advantage of the solar energy tax incentives.

With a 30 percent federal solar energy tax credit as well as an 18 percent credit at the state level, King’s Material was nearly able to cut the cost of the project in half.

It takes too long to see a return on solar energy in Iowa.

In Iowa, where the cost of electricity per kilowatt-hour has typically been closer to 8 cents, business owners can usually expect a full return on investment in five years (best-case scenario) to 12 years (worst-case scenario). ROI also depends on factors such as whether you take advantage of federal and state tax credits for solar energy in Iowa.

Reality: How much free “fuel” (sunlight) you get is based on how many hours per day a solar array is exposed to good sunlight. In Iowa, on average, we see about 4.5 daily hours of “good sunlight.” The summer months are obviously the best time, but the winter months still offering plenty of sunlight.

In a single hour, the amount of power from the sun that strikes the Earth is more than the entire world consumes in an year.

What's the solar energy potential in your area? 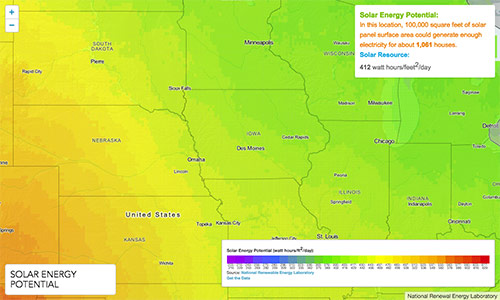 It’s typical to compare Iowa to states like Arizona or Texas and think, “Solar power must work so much better there – they get more intense sun.” Compared to Iowa’s 4.5 hours of “good sunlight” per day, a state like Arizona receives around 6 hours per day. The perfect operating temperature for a solar array is right around 77 degrees F., so solar array modules can be less efficient in climates like these with very high temperatures.

Another little-known fact: Germany – which is on the same latitudinal plane as Iowa, sharing the same solar resources – has the most solar capacity of any European country. In fact, Germany has been known to generate excess renewable energy and feed it back to the grid. This is known as “net metering,” and is also an option for solar energy in Iowa. Your meter runs in reverse as you are credited for the power you generate for the utility. It also works the other way as well: If your building needs electricity, but your solar system isn’t producing enough to meet demand, you can pull energy from the grid.

Reality: When comparing wind energy to solar energy in Iowa, solar is less expensive in terms of hardware and labor. Wind turbines have moving parts that can wear out and require maintenance; solar systems don’t have moving parts, and don’t require regular maintenance.

Solar energy in Iowa becomes more efficient every year. Every three to four months, wattage becomes denser; we’re able to fit more watts into the same footprint, which continues to drive costs down.

Check out some of our solar projects in Iowa... 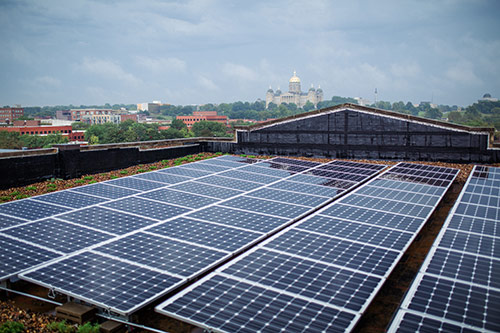 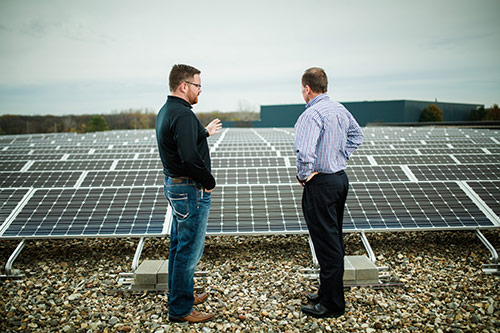 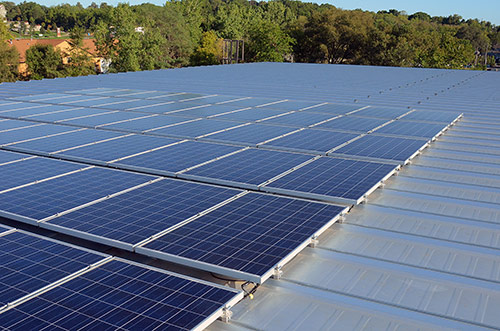 Who can help me with solar power?

Van Meter can help with every step of your solar energy project, from site assessments and photovoltaic system design to delivery and training. We have more solar energy panels and accessories on the ground and in our warehouse than all other Iowa distributors combined, offering same-day or next-day delivery. We can drop-ship all the renewable energy products needed for a solar photovoltaic system straight to your jobsite.

We’ve also installed solar photovoltaics on several of our own facilities, seeing up to a 96% reduction in energy bills as a result – we know how to help you make the most of solar energy in Iowa.